200 Id-ish objects: cobbled, carved, adorned from ordinary materials, inspired by disorder in several series.  Make It and See Who Comes!

We make things: tables, chairs…deals, dinner, trouble, our way, friends, good time, enemies, waves … the list goes on and on.  Making is our way of being in the world.  Making is a way of outering or uttering what we know, feel, believe, desire. Our objects --both made, bought, broken,    lost and gifted-- become our milestones, and our millstones.

ns and --new patterns--on the materials around us.  These patterns, textures, forms are the ways we try to understand who we are and how and why we are changing.  Making is as fundamental as breathing. Making is both

an in-breath and an outbreath, doing

and undoing.  It's a process, a practice, not

an end in itself. It is a way to explore the less obvious, less accessible parts of ourselves.

We can make our way into the unconscious.

We can develop objects and tools to help us know better the fleeting, shadowy, elusive parts of ourselves which nonetheless carry great power over our actions. As my teacher Al once said, "As above, so Below. Those objects are the R&D of our daily life. Make more!"

Imaginal Artifacts are objects which resemble tools, furniture, art, but perform ambiguous and changing functions. They are the work of the bricoleur, that imaginal artisan who senses that certain objects are looking to get into the material world to do their work. He helps that process by finding the materials and the forms for that to happen. The objects are familiar and strange; precious and common; fragile and durable; timeless and ephemeral. 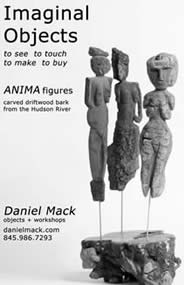 Since 2004, Dan has been collecting pieces of water-worn bark from the banks of the Hudson River.  Working with the natural patina and textures, he carves away to reveal human-like features and mixes with feathers, bones, old tools, common objects.  These blur between art, kindling, altar totems and GIFTS to people in Transition. 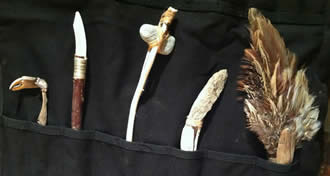 Devices to explore, direct and concentrate enegy.  These resemble tools and actually help identify the task they are needed for.

First, Make the Tool and then see what purpose it assists with.

Tool Kits, canvas pouch with 10 -15 small made and found objects

Common small stones are carved and shaped with a pocketknife and smoothed with sandpaper. It's another form of Intuitive Making: based in the casual, immediate, simple er, "mindfull"?

We all play games. The ideas of playing, rules, winning, losing are deeply embedded in our psyche. What if, in service of learning more about who we re, we played gmes that had rules that emerged as they were played.   Changing ways of "getting points", of picking cards, of rolling dice and moving pieces on the board.. What if the "board" was a pillow, or a cutting board?

The only excuse for making a useless thing is that one admires it immensely. All art is useless.
- Oscar Wilde

What to DO with Imaginal Objects?
More Again

"The creative process, so far as we are able to follow it at all, consists in the unconscious activation of an archetypal image and elaborating and shaping the image into the finished work. By giving it shape, the artist translates it into the language of the present and so makes it possible for us to find our way back to the deepest springs of life."  Carl Jung