In the last 15 years, Daniel Mack has created a large collection of carvings to honor and reflect the emerging, changing qualities of human life. They are crones, elders, caretakers, hermits, misfits and shamans.

They start from driftwood bark collected from the Hudson River and take on form, feature, colors and bits of nature and culture. Most feature that late-life opening and power emerging from the chakra at the top of the head.

"Consider, then, Daniel Mack’s installation of detrital driftwood that suggests idols in twilight,

that one gesture or a few, marks the difference between the ordinary and the extraordinary."

They began as an accident.

I had gone hunting for driftwood and could not find exactly what I wanted and somehow recognized the many pieces of bark, hiding right there in plain sight. That was in 2004. This has alerted me to the importance of Chance, Coincidence and particularly the Need to Hunt.

They have their own ways.

Sometimes the heads come off, the breasts get bigger, smaller or become one.

Sometimes they like to pair up or get in groups; Others are quite solitary. Most are kinetic—they wiggle, bob and lean. They have something to do with what Jung calls the “bush soul”

Because they are not much shown or sold, other rules developed:

I got to learn from them about carving and knives,

I got to learn about Alchemy, and opposites-in-affinity.

I got to learn about nixies, nymphs, dryads and Baubo

I got to know more about Shadow and our many s’elfs.

I got to learn about  anima -- our impersonal, amoral nature 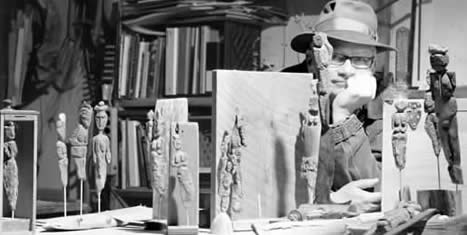 They have something to do with the later stages of the alchemical process when the King and Queen unite; our many other s'elves who have been waiting to appear.

They mean many things and opposite things.

They are totems, dolls, fetishes, memoria;

They are both mirrors and windows, reflecting back what we know and feel, and helping us see into new, sometimes dark places.

“Everything the anima touches becomes numinous-

They complain when they have to go off to gallery shows.

They try to convince me there are OTHER ways and OTHER places they should be.

I recently had some in my home on their pedestals and, sure enough, they found their way into several potted plants.

Others left the Studio to live in the front yard.

There seem to be several clans

Some gang up in threes, wear adornments and whisper about each other

Some are just heads... bodies forgotten

Some need to resemble Tools

Some only live Outside

"Man himself did not create the spirit, rather the spirit makes man creative, always spurring him on, giving him ideas...’enthusiasm’ and ‘inspiration.'"  Carl Jung

They are representatives of the "spirit": that autonomous, active force of the unconscious that generates ideas and thoughts, inspires, invents, and arranges images. All humans, not just self-styled "artists", help materialise Spirit. They work with people on the making; they make sure the materials retain an integrity and the maker stays an apprentice. They help people understand the dangers of over-crafting.

Single ones are $150 each. Some gang up in twos and threes for longer stories and cost more!

"Mack’s Anima figures welcome viewers to the exhibition. Reminiscent of Antony Gormley’s Field or Ana Mendieta’s silhouettes, these small objects are fashioned from bark collected along the Hudson River. Mack finds the figure held within the bark. He sees them as having their own agency in terms of form, placement and even di

splay. He listens, observes and then creates."

WHERE THEY WERE SEEN

Poem  The Search for Atlantis